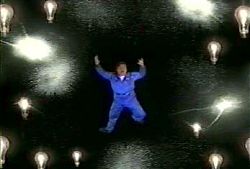 I'll take a whack at explaining wire removal. I'm not necessarily the greatest writer, so if I confuse you please ask questions and I'll try to clarify.

I'm very pro-Commotion for effects (as opposed to After Effects). The reason commotion is good for wire removal is that it allows you to paint on frames. The other reason is that you can play the clip in real time and see if the effect is working or not. I did wire removal on "Bubba Ho-Tep" and used Commotion exclusively.

Mostly I used commotion's Wire Removal tool. Sometimes, depending on the shot, the Super-Clone tool does the job better because it gives you more control. It depends on whether the shot is steady or panning, how the wire is moving in the frame, and what the wire is in front of (the background).

The basic idea is to replace the wire with whatever would have been behind it. That background information can usually be found in another frame of the shot, if say the wire is moving.

Good wire removal really just takes practice. Sometimes after the wire is gone, even though it looks fine on each individual frame, you'll still see a ghost of the wire when the clip plays at full speed. Most all video (and especially film) has some sort of noise or grain. If the quality of the grain changes, or worse, freezes, you'll probably notice it and therefore see a ghost. So just as important as hiding the wire, is avoiding the ghosting. This comes with practice and with finding the right technique for your particular shot. On Bubba I would often scrap an entire session and start over several times. Just keep trying.

The Wire Removal tool has two methods to choose from, Restore and Seam. With Seam you "draw a line" over the wire and it pulls the pixel information from the left and right of the line to smooth over the wire. It works like zipping up a zipper. If the original footage was shot on film, the smoothing can cause ghosting because the film grain is smoothed out. I hardly ever use Seam because of that artifacting. I would use it only if neither of the next two methods work.

With Restore you still "draw a line" but rather than painting with a color, it paints using a different frame's image as a source. Let's say you have a steady shot or a locked off shot, but the wire is moving. In the earlier or later frames the wire is hopefully in a different location. Restore lets you choose another frame where the wire is missing at this location and use that as a source to fill in the background over the wire in the current frame. So it actually helps if the wire is moving a lot.

The Super clone tool does the same thing as Restore, but has more options and allows you paint with a brush rather than a line tool. It also allows you to choose a pixel offset, which is handy if the shot is not so steady.

One last hint on my technique: In combination with the above tools, I make use of different paint modes (normal, lighter, darker, add, etc.) and different paint opacities. Donâ€™t always work at 100% and "normal". Try removing it a little less. Sometimes leaving a hint of the wire behind helps to hide it and avoids the ghost.

Retrieved from "https://channel101.fandom.com/wiki/Wire_Removal?oldid=5334"
Community content is available under CC-BY-SA unless otherwise noted.