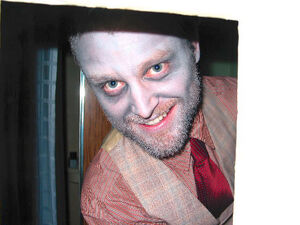 Todd Bishop hails from Milwaukee, which is in the midwest. His hobbies are fast cars and fast women and line dancing. In 1996 Todd Bishop invented internet dating and because of it he is responsible for over 2 million "hook ups" and counting.

He received a BFA in Fine Arts - Film from the University of Wisconsin-Milwaukee in 1997.

Served as Editor, Co-Producer and Director of Photography on Time Belt. Worked on the Independent Spirit Awards, MTV Video Awards and as Segment Director on 407 episodes of Jimmy Kimmel Live! He is a member of the band Irritating Rainbow.

I hope you will find it useful. I can make it long if you want and add things or take things out if you think that will be better. Or don't use it, but you should because I love all of your shows, especially Losting even though I haven't seen it. I want to be a part of it so bad. I hope you get voted back, because it's no secret that I am the hugest Losting fan, and I want to be in episode 2 in the background. But really, I want a big part in the show, and I want to ne like one of the stars, if not the star.

Here is the music:

also like I said, I own the rights to the music, so if you want to use it, you can because it is mine.

Plus, I worked on MONK today and Monk farted in front of me because he thought he was alone.