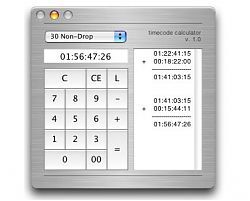 In video or film editing each frame needs a specific address so that you can identify one frame apart from another frame. There are many reasons why this was necessary historically and why it's still needed today with electronic editing but that is a different discussion.

Timecode is addressing system that does this for video. Keycodes and/or edgecodes do it for film. Timecode identifies each frame individually as long as that particular timecode address only exists once on each tape. Tape numbers should be used to identify one tape from another.

First I'll get to the meat and then I'll do the gravy.

Think of your video tape like a really long street where each house is a frame. Each house needs an address and in video Timecode is that address. When you play the tape we're driving by those houses. The rate at which houses go by is called "frame rate". Video does play at 29.97 frames per second and not 30. That is a whole other discussion but for now it's just a fact.

Non-drop timecode gives each house a consecutive time number. Over time, because the frame rate is 29.97, the timecode grows faster than actual time. This is because the timecode addressing system is giving a new "second" number to every 30 houses. You can't have 29.97 houses. So non-drop timecode counts frames, not time. This is great for simplicity of timecode numbers, but doesn't work for network television (or 101) because a show with a timecode of 30:00:00 would actually be longer than that in real time. (because of the frame rate)

Let's go back to out street analogy. The houses are all still there and each one still has a unique address. They just are no longer consecutive. I can't remember the exact formula, but every now and then an address is skipped. It's always at an even minute and the next 00 and 01 are always the ones skipped. Again.. It's not frames that are skipped but addresses. It happens on real streets too, but of course not in an exact pattern.

So that's drop and non-drop. If you have any questions I'll answer them even if it means research on my part.

Sidebar: Sometimes when shooting people will scroll back on the tape to review what they shot. Then when they fast forward back to the end of the tape they'll pass the last frame and get into 'the blue'. Most cameras will start the timecode back over at zero. Then when they start shooting again they'll have duplicate timecode. I try to always shoot a little extra crap at the end before I back up. Then I ff into this crap. My camera (VX2000) will then continue the timecode from that point. This prevents me from having duplicate timecode. I'll talk more about they why's later on.

What it a timecode track and how does it work? Timecode is generally an extra track on the videotape that stores this address. There are different kinds of timecode tracks on different tapes: Control Track, LTC, and VITC. Beta and Digibeta uses all of these.

Control Track - VHS uses control track. It's like a "blip" for each frame. So when you put the tape in the machine, that's zero. Each time it hears a blip it adds one. However, if you take out the tape and put it back in you're back at zero. So it doesn't really work for editing. It only gives you a offset reference.

Linear Time Code - Used in DV, this is like another audio track on the tape which records the timecode address as a sound. The deck translates the sound into a specific number. If you listen to it it sounds like a modem or an old computer tape from the 80's. Each frame on the tape can have a unique timecode and whenever you put in the tape it can read what it is.

VITC or Vertical Interrupt Time Code - This is a visual representation of the timecode encoded in a line of video. It also translates into a specific address. It does not require an extra track on the tape because it's encoded in the video track. It's used in like beta and digibeta.

More later if you want it...

Retrieved from "https://channel101.fandom.com/wiki/Timecode_Explained!?oldid=5337"
Community content is available under CC-BY-SA unless otherwise noted.