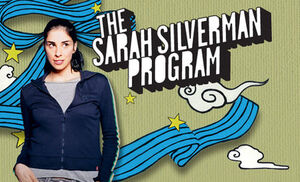 The second season resumed airing on October 8, 2008 and finished December 11, 2008. It was announced in Sarah Silverman's e-mail newsletter, on March 3, 2009, that The Sarah Silverman Program has been picked up for a third season; writing for the season began on Wednesday March 4. The third season starts February 4th 2010.

The series stars Sarah Silverman, Laura Silverman, Brian Posehn, Steve Agee, and Jay Johnston. Silverman plays a fictionalized version of herself, an unemployed, immature woman whose goals and direction in life are undefined. Her most notable trait is her undiluted, childlike self-absorption, which commonly leads to awkward situations in which she insults friends, family and total strangers indiscriminately. Sarah's real-life older sister, Laura Silverman, plays her responsible younger sister of the same name. She takes care of Sarah, despite the chaos she brings down around them. Laura pays Sarah's rent and helps her out in most situations.

Posehn and Agee play Brian and Steve, a gay couple who are Sarah's neighbors and friends. Sarah, Laura, Brian, and Steve all hang out in a group and frequently eat brunch together in a coffee house called Joseph's. Laura is dating Officer Jay (played by Johnston), a police officer, whom she meets in the show's first episode when Sarah is charged with a DUI, after which he joins the ensemble. Laura and Jay seem to be in love with each other, and Jay certainly makes an effort to be kind to Sarah whenever he can. However, Sarah is jealous of him because she fears that Laura is replacing her with Jay. Despite Jay's kindness, Sarah vows to destroy him. All of the main characters live in Valley Village, California, a district in the San Fernando Valley portion of Los Angeles (though in the show it is portrayed as an independent city).

The show features Sarah Silverman performing comedic songs in between some scenes. Silverman's comedy usually revolves around ethnic stereotypes, toilet humor, and similar taboo humor about modern life, which mirrors her real-life standup act. Adding to the humor is the contradiction between Sarah's apparently cute and harmless appearance and the character's vast destructive capacity. Each episode begins with Sarah presenting a brief slideshow overview of her life and the various people in her life. Most episodes end with Sarah, back in bed at her apartment, comically explaining (to her dog, Doug) what she has learned from her recent experiences.

Sarah Jane Anastasia Silverman (Sarah Silverman) - The main character who is extremely childish, immature, and exhibits a lack of diplomacy or sensitivity to others. She often acts impulsively, completely oblivious to anyone or anything else. Sarah doesn't have a job and her sister Laura pays her rent. Sarah is very close to Laura, and she has a dog named Doug, "Chihuahua-pug mix",[3] whom she found in the trash. Her favorite TV show is Cookie Party!, a show about cookies in which viewers vote for their favorite cookie. She enjoys watching the show with Laura as a weekly ritual, though going on Cookie Party! as contestants was not without its pitfalls for Laura and Sarah, as well as their mother's skeleton (episode "Doodie"). Sarah is jealous of Laura's relationship with Jay and assumes that Laura is replacing her by dating him. She retaliates by attempting to undermine their relationship. In the episode "Positively Negative", she expresses her unhappiness with Jay and Laura's relationship by sitting between them at brunch. In the first episode, her car is impounded after she drives under the influence of a cough syrup. She attended Valley Village High School with Brian, Steve, and Laura. Sarah and Laura's parents, Max and Rose Silverman, died when they were young (though, it is later revealed in the episode, "I Thought My Dad Was Dead, But It Turns Out He's Not", that her father is actually still alive). In the episode "Positively Negative", Sarah says that her mom was a "bitch" and that her dad was an "ass-munch." She claims to have spent an extended period of time in Haiti, but is unsure exactly how long, as she was "doing a lot of heroin at the time". In the episode "Not Without My Daughter", it is revealed that Sarah placed 2nd in the Little Miss Rainbow Pageant, and that she had tried out for the pageant every year since even though she was too old to compete. It is also mentioned in the episode that Sarah got pregnant and had an "abortion" 10 years ago and that she was eight-and-a-half months pregnant when she went to the hospital and ordered, "Get that thing out of me!" Her description of the abortion strongly suggests that she actually gave birth and abandoned the baby by climbing out the window.

Laura Jane Silverman III (Laura Silverman) - Sarah's younger sister (in real life, her older sister), is a registered nurse. Their parents died when they were young (Her mother's tombstone claims she died in 1986, when Sarah was 10), and Sarah is the only family that Laura has. Laura is very susceptible to guilt, making Sarah's manipulation of her remarkably easy. She is more responsible than Sarah and devotes most of her life to taking care of her. In the first episode, she brags to Jay that she can eat 30 hardboiled eggs in one sitting. She used to have a large amount of pubic hair ( like her mother ) until the episode "Patriot Tact" where she shaves it all off after her mother came to her in the form of a ghost and tells her how its ok for Laura to shave. She falls in love with Jay in the first episode. She attended Valley Village High School with Brian, Steve, and Sarah. Laura pays Sarah's rent because Sarah is too lazy and immature to get a job or to support herself. Laura is currently engaged to Jay.

Brian Spukowski (Brian Posehn) - Sarah's gay neighbor and friend, who is dating Steve. He claims to be an enthusiastic metalhead but in fact only has one song on his five-year-old iPod, the Spin Doctors' "Two Princes." In the first episode, he claims to be bisexual, which causes some strain with Steve. Following a near-death experience, when Sarah crashes their car, Brian tells Steve that the event put things in perspective and that he remains gay. Brian takes karate lessons, but only uses his skills when he sees it is necessary (and not to defend Steve, episode "Humanitarian of the Year"). He and Steve occasionally double date with Laura and Jay, which they secretly dread. Brian attended Valley Village High School with Sarah, Steve, and Laura.

Steve Myron (Steve Agee) - Sarah's gay neighbor and friend, who is dating Brian. He makes wry comments on his partner's antics, or may even prompt them (such as by suggesting Tab could be a fine beverage). In the first episode, the sight of women in lingerie made him physically ill due to (or despite) the fact that Brian had pasted his face on all the women in the catalogue. Steve enjoys playing Halo 2 online. He is often assaulted by strangers, who claim that his face just makes them want to punch him. Despite knowing karate, Brian usually lacks the will to stop people from punching Steve. Although Sarah and Laura have two friends that are named Steve, they nicknamed Steve "Straight Steve" to be ironic because he is gay. His family no longer speak to him due to his homosexuality and relationship with Brian. He attended Valley Village High School with Sarah, Brian, and Laura.

Officer Jay McPherson (Jay Johnston) - A police officer who is dating Laura, Sarah's sister. Jay met Laura when he arrested Sarah for driving her car into a playground sandbox after drinking too much cough syrup and passing out. Jay is also a closet performer, in the genre of sentimental "gentle comedy" character sketches. Jay dislikes Sarah and calls her "the cuckoo clown" (in the episode "Positively Negative"), but he is so devoted to Laura that he will go out of his way to help Sarah, even when she vows to kill him. Jay wins a "Humanitarian of the Year" award for the work that he does reading to blind people. Growing up, he never celebrated his birthday because his mother told him that every day was his birthday. (She'd only told him that to cover up her beer and cake addiction, which ended up killing her on Jay's actual birthday.) Jay also has a brown moustache. In "Muffin' Man," Jay mentions that his partner, Officer Paul Tompkins, has been suspended for opening fire on a Hispanic youth who pulled a pellet gun on him, and that he had received a temporary new partner named Tig who is a lesbian. Jay was also very attached to a turtle he owned, Toot. Toot was shot to death by Sarah (in the episode "Pee"). It was revealed in Season 2 that Jay had an uncle that was killed by an electric eel. He proposed to Laura on the second season finale.

Max Silverman (Mark Cohen) - Sarah' and Laura's father. He was originally thought to be dead, but in the episode "I Thought My Dad Was Dead, But It Turns Out He's Not" Sarah finds out that he is alive after encountering him in a bookstore. Sarah introduces him to Laura on a television talk show where Laura is visibly angry and shocked. Max and Sarah go on tour as Lisa Loeb cover singers called the "Loeb Trotters". At the end of that episode Max reportedly dies 'again' in a bus explosion. He has been referred to by Sarah as an 'assmunch'.

God (Tucker Smallwood) - He has a one night stand with Sarah in "Batteries", then rekindles their relationship in "Ah, Men".

Retrieved from "https://channel101.fandom.com/wiki/The_Sarah_Silverman_Program?oldid=11748"
Community content is available under CC-BY-SA unless otherwise noted.