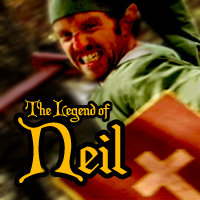 The Legend of Neil is an online sitcom distributed by Comedy Central's partner Atom.com.[1] The series follows Neil, who was playing The Legend of Zelda when he masturbated to the fairy in the game while drunk and strangled himself with his NES controller. Somehow he was transported into the game and is subsequently mistaken for the game's hero, Link. The series, "full of self degrading, foul humor"[2], is written by Sandeep Parikh and Tony Janning; Parikh also directs. It stars Janning, Mike Rose, and Felicia Day. Day also stars in The Guild and Dr. Horrible's Sing-Along Blog; The Legend of Neil includes a musical episode that pays homage to the latter.[3]

The Legend of Neil was a Web Winner for Acceptable.TV and can be viewed in the June 11th Video Podcast.

Retrieved from "https://channel101.fandom.com/wiki/The_Legend_of_Neil?oldid=10480"
Community content is available under CC-BY-SA unless otherwise noted.