Story Structure 105: How TV is Different

Television really is no different, except in one, very practical sense:

A feature film's job is to send you out of the theater on a high in 90 minutes. Television's job is to keep you glued to the television for your entire life.

This does not entail making stories any less circular (TV circles are so circular they're sometimes irritatingly predictable). It just means that the focus of step (8) is less riling-things-up and more getting-things-back-to-where-they-started.

The pilot episode of a TV show usually tells the story of a person entering a new situation. New job, new marriage, divorce, just got out of college, adopted a black person, started spinning cities, sainting elsewheres or willing graces. I'd be really bad at examples because the only TV I watch is the show my friend is on, "Happy Family." In that show's pilot, the baby boomer husband and wife realize, for the first time, that no matter how old your kids get, they never stop being your kids. The "new" situation can be as simple as that, a realization, a theme, the thing that your show is about.

In a larger scope, a TV pilot is giving us (1), (2) and (3), then encouraging us to tune in and watch (4) for the rest of time. But that's looking at the entire run of the show as a single story. Within the scope of an individual episode, pilot or not, you still have to run a full circle:

Uninspiring? Yes, but the joy of TV is in the moment. TV isn't selling revolution, it's selling a hygienic, relatable substitution for your own filthy, unmarketable humanity. The stories are just killing time while the voices and faces wear a groove in your brain and the commercials do their hard, hard work.

But notice how, being required to keep our attention, they have to do so with that circular structure. If we don't get that circle, we'll flip to the next channel.

The characters must start in the ordinary situation, descend into a new situation, adapt to it, become native to it, pay the price and then flock back to basics having "changed."

The trick that television plays is that it swaps out any meaningful and therefore potentially television-subverting truth with the basic, eternal "truth" that change is unneccessary. "What did you learn today, Beaver?" Well, basically, Dad, I learned to never do anything. "Good boy."

There's nothing sinister about the intent, the intent is just to save money on sets and keep scripts relatively modular. You're the one that wanted a capitalist society. Welcome to the overhead-reducing, profit-maximizing techniques of storytelling for money.

That's where Channel 101 comes in. We are not so financially encumbered. We are the next stage in entertainment's evolution. 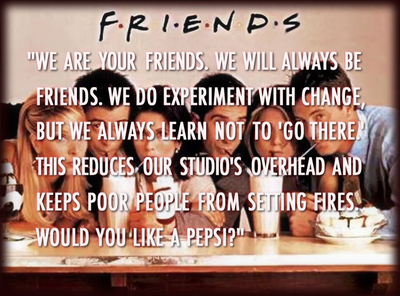