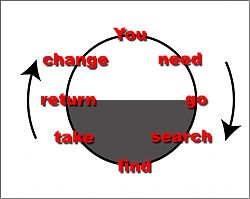 Here are those steps from tutorial 101 again, boiled down to the barest minimum I can manage while still speaking English:

Sounds like a caveman giving you an order. That's what it is. Behind (and beneath) your culture creating forebrain, there is an older, simpler monkey brain with a lot less to say and a much louder voice. One of the few things it's telling you, over and over again, is that you need to go search, find, take and return with change. Why? Because that is how the human animal has kept from going extinct, it's how human societies keep from collapsing and how you keep from walking into McDonald's with a machine gun.

If you were hired to write a script for a race of super-evolved spiders, you might find that they prefer a more linear model. In the spider version of Jack and the Beanstalk, Jack might build his own beanstalk, find a sandwich at the top of it, eat some and save some for later. The End. That's not really inspiring to us. We like us some circles. We like big ones, we like little ones, and given the choice, we'll take a shitty one over a lack of one, but, unless you're writing for some other species, it will pay for you to keep things fairly round.

Jack goes up the beanstalk, Jack finds some cool shit, Jack steals it, runs back down, and gives it to his Mom.

We need go search- We need get fire, we need good woman, we need land moon- but most importantly, we need RETURN and we need CHANGE, because we are a community, and if our heroes just climbed beanstalks and never came down, we wouldn't have survived our first ice age.

I know you still don't believe this has anything to do with your five minute episode of "Laser Fart." Hang in there. The goods are next.

Next in series: Story Structure 104: The Juicy Details