Channel 101 Wiki
Register
Don't have an account?
Sign In
Advertisement
in: Scud: The Disposable Assassin, Rob Schrab, Projects Related to Channel 101,
and 3 more 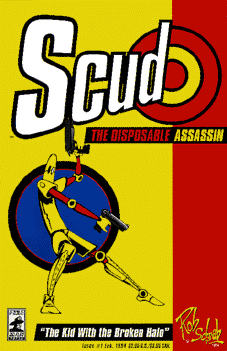 Scud: The Disposable Assassin (published from 1994 to 1998, and 2008) is a humorous, hyperkinetic science fiction comic by Rob Schrab about a world in which one can buy weapons out of vending machines, the most popular of which are intelligent robots that kill a specified target and then self-destruct.

The protagonist of the series is Scud, an average Heart Breaker Series 1373 model assassin. On his first mission, he is sent to kill Jeff, a rampaging female mutant with mousetraps for hands, an electrical plug for a head, and a squid for a belt.

During his first mission, Scud glances in a mirror and sees the warning label on his back explaining how he will self-destruct upon completion of his mission. Realizing that he doesn't want to die, Scud mortally wounds Jeff, shooting off her arms and legs, then takes her to a hospital placing her on life support ensuring their mutual survival.[1]

The last issue, #20, leaves the series with a cliffhanger. Schrab was growing dissatisfied with the direction the story was taking, and stepped back from the book rather than allow things to get worse.[2]At the same time his career in Hollywood began to pick up, so he shifted focus further away from the book. Since then Scud's publisher, Fireman Press, was dissolved after a falling out between Rob Schrab and a business partner over rights.[3] thumb|300px|right

On January 3, 2007, Schrab announced on his blog that he plans to finish Scud in four parts, Issues 21-24, at which point he would be releasing an omnibus of all the books, Scud #1-24.[4]Since this announcement, there have been several podcasts posted to Schrab's site giving his state of mind during the process, opportunities he is passing up to finish the book, and a view of the process he uses to create a comic page.[5]

Schrab recently announced that the Scud finale will be four times the original length. Instead of the planned 32 page conclusion, The Book will be over 111 pages long, making it Schrab's biggest comic project to date.

Rob Schrab told fans that "he just couldn't make this another issue. I want Scud to go out with a bang."

Because of this and with Schrab producing, directing and writing The Sarah Silverman Program for Comedy Central, the Complete Scud Book was not out by the 2007 Comic Con but it was out in time for the 2008 Comic Con.

The final installment of Scud was released as a four-part mini-series published by Image Comics, with covers done by guest artists.

Rob Schrab has stated that he currently has no plans for further issues of Scud Spin-offs – Scud: Tales from the Vending Machine, and The Drywall & Oswald Show.

In a closing interview, conducted by Doug TenNapel at the end of Issue #24, Rob stated that he would like to see La Cosa Nostroid concluded, but that it would be up to Dan Harmon, who helmed the series. 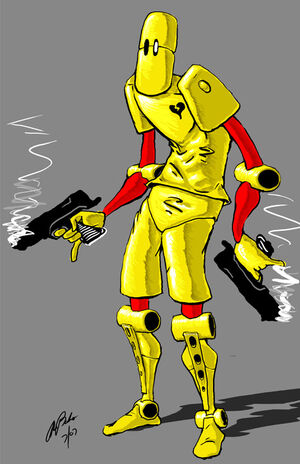 Several comic book series were published by Fireman Press, all of which take place inside the Scud universe. These include:

Scud: The Disposable Assassin has been collected in trade paperback form. These include:

Scud was optioned as a possible movie from Oliver Stone's production company, but the option has long since lapsed.

A 6" Scud action figure was announced in 2006 as a part of Shocker Toys' Indie Spotlight line.[6][7] The addition of the figure to the toy line was cited by Schrab as one of his motivations for wanting to finish the issue #21 in his first video blog.[8]

In the annual Homestar Runner animated Halloween special for 2008, the characters Pom-Pom and The Cheat dressed up as Scud and Drywall, respectively.