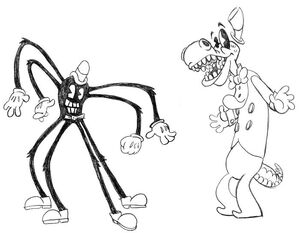 Rob Schrab's cardboard and hot glue universe wowed audiences for five straight months, right up to the end of the 2003 season, when it was cancelled by ONE vote - a vote withheld by its own creator. Ringwald and Molly is a must-download and will forever occupy a space in Channel 101 history as one of the original five Prime Timers, along with STA and B & MG.

The characters originally appeared in Ringwald and Molly In: Hobophobic!.