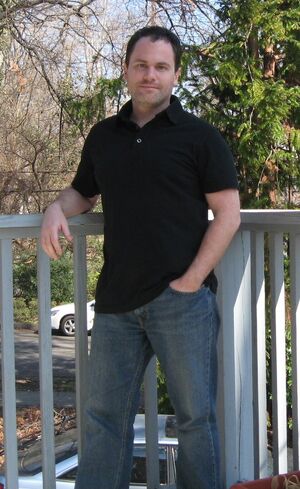 Nick Gibbons was born on January 24, 1973 around Dallas, Texas. He graduated from the University of North Texas with a Bachelors of Fine Art. He worked for 7 years at DNA Productions in Irving, Texas, including work on the Oscar nominated film Jimmy Neutron. During that time Nick wrote and produced several short films that have been seen on MTV, FUSE, PBS, and Comedy Central. In 1999, Nick won best-animated short film at South by Southwest. In 2003 Nick moved to New York City, where he worked at Blue Sky Studios on the motion pictures Robots, Ice Age 2, and Horton Hears a Who. Nick has performed comedy at Caroline’s on Broadway, the Upright Citizens Brigade Theater, and several other venues around New York City.

In 2007 Nick was a finalist in HBO’s Andy Kaufman awards and performed at Caesars’ Palace in Las Vegas. Nick has written comedy articles for Toy Fare magazine, episodes of the show Robotboy for Cartoon Network, and most recently an episode of the Adult Swim show Aqua Teen Hunger Force. Currently Nick is writing and producing while working on the show Archer for FX. Nick also spends his free time performing improve comedy at Dad's Garage Theater in Atlanta.

Nick has made over 25 short films, some animated some live action, all comedies. For 6 years he wrote and performed in a weekly comedy/variety show in Dallas called Ricki Derek's Night-O-Cabaret where he developed over 30 different characters. He has performed improv, stand up and sketch comedy regularly at the Upright Citizens Brigade Theater in New York City. He has written for Aqua Teen Hunger Force.

Retrieved from "https://channel101.fandom.com/wiki/Nick_Gibbons?oldid=10596"
Community content is available under CC-BY-SA unless otherwise noted.