Channel 101 Wiki
Register
Don't have an account?
Sign In
Advertisement
in: It's Twissleton, Failed Pilots, Justin Roiland,
and 8 more 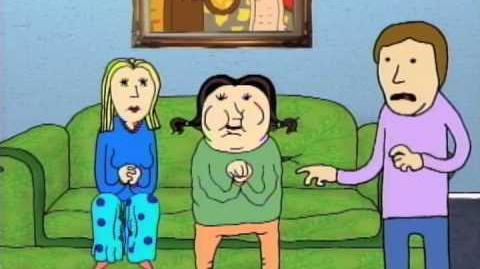 Summary
The creators of "Friends and Lovers" return, this time coupling their trademark absurdity with a coherent story and likeable characters. Not to mention the amount of work that has to go into a Channel 101 animated show. This one could have been a real juggernaut, but my feeling is that it suffered from the sometimes unpredictable effects of maximum audio volume in Cinespace's theatre. Some of the dialogue was hard to catch at the screening- which is not the case at all on your computer, so enjoy.

It's Twissleton was the sophmore attempt at a Channel 101 pilot for the Comic Sacrifice team. This is back when Justin Roiland did all of the art. Sevan Najarian helped assemble and color the material and in turn made it all move in After Effects.

Abed Gheith and Justin Roiland collaborated together on this script. The two also voice all of the various characters except the voice of Admiral Telemachus, voiced by Paul F. Tompkins.

A second episode has been written, and recorded but not animated. There's a rumor that it will one day make itself out of the blue.