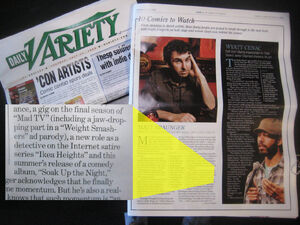 A melodrama shot in an Ikea furniture store in Burbank, CA. Created by Dave Seger and Paul Bartunek, the series centers around the dramatic goings on of a community located in the fictional town of Ikea Heights, which is in reality a Burbank, Los Angeles area Ikea store.

The show is shot guerrilla style, with the store and customers providing a lively backdrop for the action within each episode.

The series is directed by Dave Seger, who won "Best Directing" for it at the 2009 LA Channy Awards, and written by Seger, Spencer Strauss, Tom Kauffman, and Paul Bartunek.