Heat Vision and Jack was a proposed 1999 comedy/sci-fi television show directed by Ben Stiller and starring Jack Black, Owen Wilson, and Ron Silver. Christine Taylor and Vincent Schiavelli guest starred in the pilot episode, the only episode filmed. While the Fox Network didn't pick up the show, the pilot gained a cult status and an online following. The show was written and executive produced by Dan Harmon and Rob Schrab, of Scud: The Disposable Assassin, Channel 101, Dead Alewives, and The Sarah Silverman Program fame. It was recently featured as a part of the mockumentary "Tropic Thunder - Rain of Madness", only stating that the character of "Jeff Portnoy" played the role of Jack Austin. According to a March 27, 2007 interview with Rob Schrab, a script for the Heat Vision and Jack feature film was in the works.[1] However, this is now on indefinite hiatus.

The rights have been passed onto an agency who are planning an animated adaption.[2] 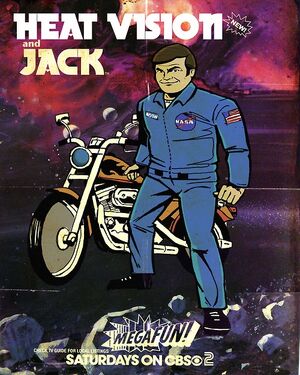 The pilot opens with a monologue of Ben Stiller talking about his canceled show and the Emmy award he won and sarcastically criticizing George Lucas. The show then opens and explains how Heat Vision came into existence and Jack's new powers which he got while in space, a homage to the Fantastic Four. The opening credits visually reference both The Six Million Dollar Man and Buck Rogers in the 25th Century.