Chris Tallman (born September 22, 1970) is a personality of Channel 101 that created the series Time Belt. He has hosted the show Crossballs and has guest-starred in TV shows like House, Reno 911!, and the short-lived Emily's Reasons Why Not. He appeared on Frank TV as Ed McMahon. He currently stars as Hank on Thundermans!

Chris is from Madison, Wisconsin, where he attended Madison West High School. He performed with a number of theater groups in Madison, as well as being a long-standing member of the Madison chapter of ComedySportz and is currently on the roster of ComedySportz Los Angeles. He has a brother named Matt and a sister named Leigh.

Chris is an ensemble cast member of NBC's improvised comedy show Thank God You're Here, which showcases the improvisational skills of a group of four actors each week, as they walk into a live sketch without having seen a script for it. 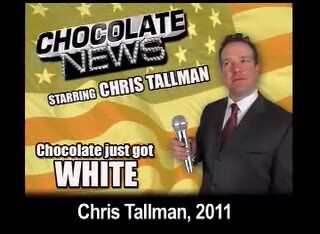 Chris Tallman was awarded the Channel 101 Lifetime Achievement Award at the 2007 Channy Awards.