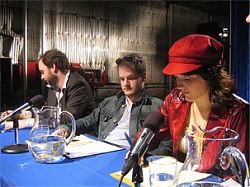 The most important thing you should know before you submit your 2.5 minute submission to Acceptable.TV is that before it even gets to me, it will be cleared or eliminated by something called Standards and Practices.

S&P is a department that operates independently of the network, and which, in addition to filtering content for the things you and I understand as profane, has recently entered the business of determining what may or may not be offensive to individuals or groups.

You might be surprised what won't make it through that filter. I want to make sure you know exactly what you're up against before you spend a minute working for us.

Think of our show as a prisoner to whom you are sending a letter. If there's anything in it that involves real freedom, it won't even get here.

The best example I can give you, and the reason I'm writing this article, is a submission from Aaron Yonda and Matt Sloan called Morning Radio Mysteries.

Aaron and Matt are the creators of Chad Vader and some of my favorite content at Channel 101. They made a show as a special favor to me, in spite of having bigger fish to fry.

In Aaron and Matt's show, a pair of morning radio DJs antagonize a rock star by insinuating that he is a homosexual.

Here's the thing. To you, a gay person might be a neighbor, or family member, or a mail man, or your worst enemy but above all, a human being. To corporations, which are not human, a gay person is not human. A gay person just represents a "special interest group," a monstrous, unseen burden, a troll under the bridge, waiting to pounce and savage their checking accounts with sponsor boycotts, bad press and lawsuits.

The audience, in general, be they black, white, gay or all of the above, represents a dangerous game for media corporations. They need your full attention, they need your eyeballs and your wallets, but they don't want to be responsible for you. They want you watching six hours of TV a day but they don't want your life touching theirs. Your humanity, your opinions, your mind, the person you really are... to them, it's just a form of liability.

So they err on the side of caution. I suppose if you were them, you'd do the same thing. Reason number 70 to be thankful you're broke. You don't have to live in constant fear of people taking your precious treasure.

Because they need you to watch, they need people like me. Megalomaniacs. Jerks. Or should I say j*rks, or doo doo, or ga-ga, or whatever letters on my keyboard are still unlocked. They need people like me to be passionate, to wave big flags with our own faces on them and say, "hey, come watch this show, and believe in it, and care about it, because I do!"

Well, I'm proud of the stuff I've made for this show. I want you to watch it. If they edit me in any significant way, I will tell you, and if they don't let me tell you, I will walk away, because I've been working that way for 34 years and it works.

It will never come to that, because I'm not Howard Stern and VH1 is not NBC. I'm pretty tame and VH1 is pretty good people. Bad graphic designers, good people, that's what it says on their business card. So, for whatever it's worth, five sixths of our broadcast will still be unmitigated Harmon and his Merry Band of Lovable Nerds.

But I'm writing this blog to let you know that the user generated material is not exactly going to be pure expression of the human experience. The really cool, raw stuff that people make is still going to be at Channel 101, youtube, etc.

This is Acceptable TV. The "acceptable" part of the title isn't all that ironic. I am property of Viacom. If you're going to send me something good, disguise it from the minds of the mediocre. Bury the file in the cake. Be honestly tame, secretly genius or shamelessly hack. Do everything I tell you not to do at Channel 101: Think twice. Calculate. Arbitrate. Compromise. When in doubt, follow your fear. Self censor. Don't even try to ride the line. You'll be over it before you start and they won't tell you until you're finished. (they never know what they don't like until you're done with it).

I have no doubt that genius will slip through the filter at some point. But let's face it, joyless crap will make it through more often, and will be heavily rewarded. We haven't even started, and joy is already being punished. Sorry Matt, sorry Aaron. Welcome to TV, internet.

If I have, in the past, encouraged you to submit to ATV for MY sake, I did so prematurely. As a control freak, I cannot care about things I cannot control, and if I can't control what submissions make it onto the site, I can't care.

I can still watch what makes it through the filter, and I'll supposedly make the decisions after that. I'll let you know when that changes, too.

Watch Acceptable TV on March 23rd. It's going to be at least five sixths of a great show, the rest will be.... inoffensive!

From Channel101.com by Dan Harmon

Retrieved from "https://channel101.fandom.com/wiki/Channel_101_will_let_you_do_anything,_Acceptable.TV_won%27t?oldid=11323"
Community content is available under CC-BY-SA unless otherwise noted.