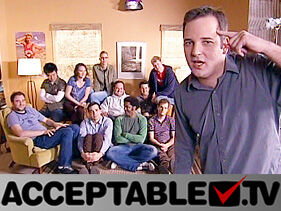 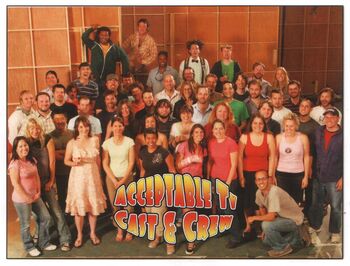 Acceptable.TV was a television program from the makers of Channel 101 that first aired on VH1 on March 23rd, 2007. It was first developed as The Pilot for FX. It featured many 101 cast members whom were referred to as the Department of Acceptable Media, the original title for the series. The final episode of the program aired on May 11, 2007.

VH1 offered to develop a second season, but only on the conditions of a lower budget and greater control on their part over the content, which Dan Harmon declined.

Each 30-minute episode consists of five 2.5 minute mini-shows created by the Acceptable.TV team, and one submitted by a viewer. After each episode, viewers can go online and vote for their two favorites. The two that receive the most votes will be continued in the following episode, and the remaining three will be canceled and replaced by new mini-shows.

In addition, the website for Acceptable.TV allowed users to create and upload their own 2.5 minute TV shows. Each week, five user-created shows were deemed "acceptable" by the show's creators, and other users were able to vote for their favorite. The top voted episode aired alongside the five cast-created shows on the VH1 television program the following Friday. A Video Podcast was made featuring Outtakes and Unaired Shows, which is still available on iTunes.

Dan Harmon on Standards and Practices

See Channel 101 will let you do anything, Acceptable.TV won't

Dan Harmon on being Rewarded