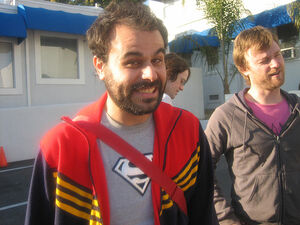 Abed Gheith was conceived in San Francisco during the decade of love, the 70's. Then his parents decided he would get beat up a lot and moved to a small town in Central Valley California, Modesto. Still getting picked on for being foreign and small. Abed was raised as a strict Muslim, but realized later in life that that religion DIDN'T provide all the answers like he was promised. He tried to become the brain type. But was then picked on even more.

Fast Forward to his early twenties when he fell into making sketch comedy with some like minded film students: Sevan Najarian & Justin Roiland, with whom he formed Comic Sacrifice, and Ben Page. Fast Forward to the present where Abed and the gang have recently been parading around town in chicken scrotum costumes and making animations. Abed does voices and hopes to start creating more pilots on his own as time allows. He also discovered Heliohydrogen.

He is the inspiration for the character Abed on Community, and Dan Harmon had campaigned for him to get the role.